For the Love of Coffee

Ashley Loh-Smith heads over to The Espresso School and discovers the subtle intricacies behind the making of everyone's favourite brew.

So, you’re organising a catch-up with someone you met at a gig the other night. Or perhaps you’re taking a gamble on that charming oddball from Tinder. Is there a better social unifier than coffee? (Alright, I’ll concede that hitting the booze is a pretty good option, but bear with me here). Whether it’s meeting an old friend, getting to know a business client, or chatting someone up, a cup of coffee is remarkably good at getting us to slow down and be in the moment with another person – and this is no less true for those of us who already have someone special in our lives.

Coffee is ubiquitous in our hectic urban life, but apart from exchanging a handful of pleasantries with our regular barista, most of us have little understanding of what goes into turning a bag of roasted beans into our favourite daily stimulant. And given that baristas quite frequently work in teams, what better way to bond with someone than shoulder-to-shoulder at a coffee machine?

A three-hour crash course in espresso-making through WeTeachMe, hosted by the outstandingly knowledgeable David from The Espresso School, is a great way to put teamwork to the test with Nelly – my good friend, life coach, strongest critic, fashion adviser, agitator, counsellor, and above all else, significant other.

To start, we’re given a brief run-down on the history of coffee, from its discovery in the 9th century in Ethiopia, its movement through the Middle East and Southeast Asia, to its cultivation throughout the world. Learning of the wide range of species and cultivars was particularly fascinating. For everyday people ordering a coffee at a cafe, we’re not particularly fussed about the species of bean or where it comes from. But following David’s explanation on the extraordinary flavours that can be found in some of the rarer (and naturally, pricier) types of coffee bean, I’m far more inclined to be a little more adventurous with my consumption in the future.

But we weren’t there for a lecture. Before long, David had us standing front of an espresso machine allowing us to find out for ourselves how the slightest differences in grind, water volume and the time spent in extraction can make a world of difference.

At one point, I had my grind settings way off in the wrong direction, resulting in an espresso that took a mere 11 seconds to pass through the handle, barely half of what would be considered a sufficient length of time. “Try it,” said David. “It’ll probably taste far too sour.” He was right. I tend to defer to Nelly’s more refined sense of taste, but even I could tell it was awful, and certainly not something you would serve up in a cafe.

Of course, not all of us drink our coffee black. Nailing the grind and extraction process will keep the purists happy, but unless you can get the milk just right you’re going to lose a lot of customers. And, much to my surprise, this step was not as difficult as I had imagined.

The process of creating the perfect texture with milk involves a two-step process of “stretching” and “rolling”, using the senses of sight (looking for the right gloss in the foam), sound (knowing how deep to place the steam tip) and touch (feeling for temperature, and “rolling” the milk before pouring). If anything, pouring the milk is arguably a trickier affair than heating it up.

Not content to school us merely on technique, David emphasised the importance of workflow. People aren’t keen on waiting for their coffee, so churning out cup after cup of quality brew is a test of efficiency in movement and multitasking. Divide the responsibilities of grinding and extraction to one person, and milk texturing and pouring to another, and you’ve got a recipe to test communication and cooperation between a couple.

Nelly and I were certainly able to punch out a couple of decent coffees by the end of the three hours, but it certainly gave us a greater appreciation for the baristas who spend eight hours a day mastering this process.

Whilst going out for a coffee is a no-brainer option when getting to know someone you’re keen on, if that person turns out to be a bit of a caffeine fiend then I wouldn’t hesitate to recommend an espresso course to learn how well you can work together, and above all else, give you an appreciation for the history and preparation of our favourite daily pick-me-up. After all, the only thing that should be bitter after this course is that cup you brewed for far too long!

Learn to appreciate your morning coffee even more 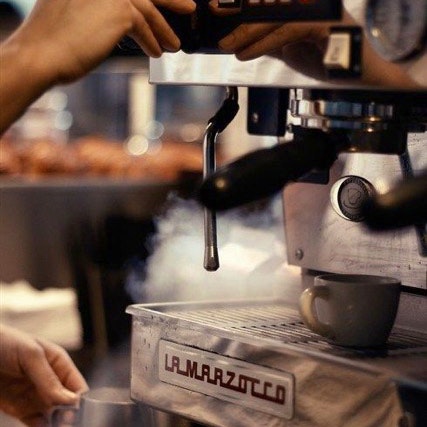 Espresso Basics - How to make coffee

Learn the fundamentals in this barista course

by The Espresso School