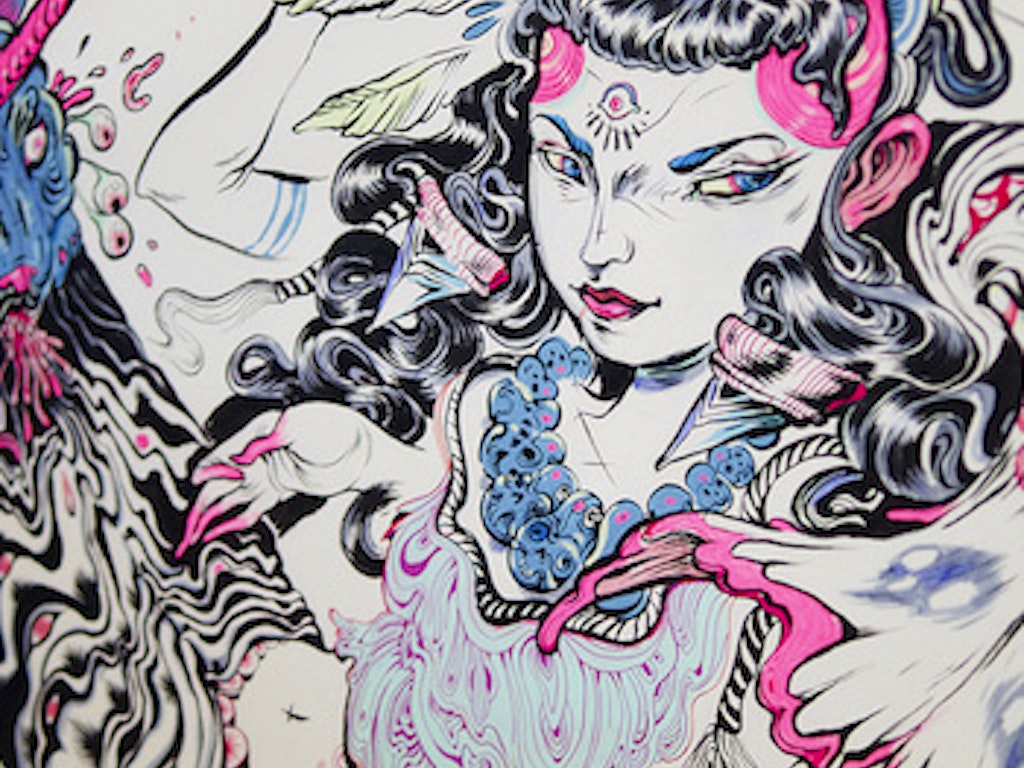 Lauren YS is an artist/illustrator/muralist whose work tends toward the creepy, bizarre and generally weird.

This 4 hour workshop is for anyone looking to unleash some of the darker stuff in their inky little brains - a crash course in illustration techniques with the freedom to draw up something nasty rather than nice.

Lauren will be leading the class through the same process she uses to create her own work--harnessing the skeletons in your closet; bringing them from concept to sketch to fully-inked illustration. Influences include mythology, horror, ghost stories, dreams, anxieties, nightmares, monsters, the grotesque, whatever keeps you up at night.

Lauren YS is a San Francisco Bay Area artist whose work is influenced by multiple stages of focus, both geographically and in practice. With dynamic bouts in academics, literature and writing, teaching, illustration, and animation leading up to her arrival in the street art world, the influences of these phases of her own career add up to a robust style of murals and fine art.

Lauren's work aims to create and populate a misfit wonderland in which imaginary heroines can address the absurdities of reality in the confines of a page or a wall. Dreams and mythology add to the myriad of influences that stem from her upbringing in Colorado and her time spent at Stanford, writing for Juxtapoz, working at DreamWorks, and teaching english to high schoolers at San Francisco's 826 Valencia.

After applying her vibrant grasp of narrative to a curriculum on creating a full-length graphic novel at Stanford as well as her initial gallery shows in San Francisco, it has only been in the last year that YS has entered the mural scene.

She completed a residency and solo show at Nychos' Rabbit Eye Movement studio in Vienna, and has since shown work and live-painted at various international art festivals and institutions.

Festivals include Art Basel Miami, Pow!Wow! Hawaii, PangeaSeed SeaWalls (New Zealand), Colorado Crush and the inaugural "Wander and Wayfare," a festival of female street artists that took place at Rocha Art in San Francisco. Her work is often geared towards pushing a narrative undertone and always has a fantastical aesthetic.