Everyone loves everything about Bob Ross, from his art and uniquely dulcet voice. And what better way to pay homage to such a widely known artist than to take the “Bob Ross Challenge”?

Inspired by “The Joy of Painting” - that’s Bob’s old television series (and now also on Netflix) - this DIY painting trend finds aspiring artists (and the occasional comedian trying to follow a random episode from the show and filming themselves while they’re at it.

These self-made videos, which have taken the internets by storm, are quite entertaining, for both painter and for viewers, too - especially these Bob Ross fans, who have taken the Challenge to a whole new level. And thus, the legend lives on.

Ever wonder if buttercream frosting works well on canvas? Well, curiously enough, it does! In this video, cake connoisseur Rosanna Pansino tries her hand at creating a Bob Ross painting with frosting, and she absolutely nails it! Not too bad for a foodie.

On today’s list of videos nobody saw coming, Internet sensation Guava Juice tries to create a Bob Ross painting with many little artists’ favourite painting material: slime! Too weird? Surprisingly, the end result is quite impressive.

I followed a Bob Ross Tutorial on my iPad!

In this video. iJustine tries to follow a Bob Ross instructional video on an iPad. She struggles to find the right brushes to use half of the time (who doesn’t?) but in the end, she does a pretty darn good job, sincerely. Certainly something gadget lovers out there can try out themselves, eh?

I Tried Following A Bob Ross Tutorial on My Face

Another One: Following A BOB ROSS Painting Tutorial.. On My Face!

Another expert makeup artist making the list is NikkieTutorials, who also recreates a Bob Ross piece on her own face. Amazing energy and enthusiasm gets Nikki extra points and her end result would make Bob Ross mighty proud.

I Tried Following a Bob Ross Painting Tutorial With My Feet

Upping the ante, Sofie Dossi goes out on a limb (pun intended) and tries to recreate a Bob Ross using her feet. Contortionist-style, Sofie tries to follow a Bob Ross video step by step, even imitating his signature calm demeanor, with a wig to boot. While the outcome isn’t exactly what you’d call a masterpiece, she made this list because watching someone paint using her feet isn’t something you get to see everyday. Kudos, Sofie.

Following A Bob Ross Tutorial on My Bedroom Wall?!

Perhaps the next best thing to waking up to the sight of a majestic mountain is getting up to a Bob Ross-inspired painting of it. In this video, Chloe Rose Art paints a massive landscape on the wall of her bedroom, in the name of Bob. Go big or go home, right Chloe Rose?

This challenge wins, if only for taking the level of difficulty to the extreme, as Jazza attempts to follow a Bob Ross video blindfolded. Quite the artist on any other day, he literally stumbles on this one, knocking over the canvas several times during filming. While the final result looks more like an, err, abstract painting, it does kind of look like a mountain, if you look closely enough. 😂

Keen to take on the Bob Ross Challenge yourself? Just get your art materials together and find an episode to follow. The only rule: After you press play, you must paint along with Bob without stopping. Final step, share your art - and your video - with the world.

Better yet, find a paint and sip workshop near you, preferably Bob Ross-inspired! 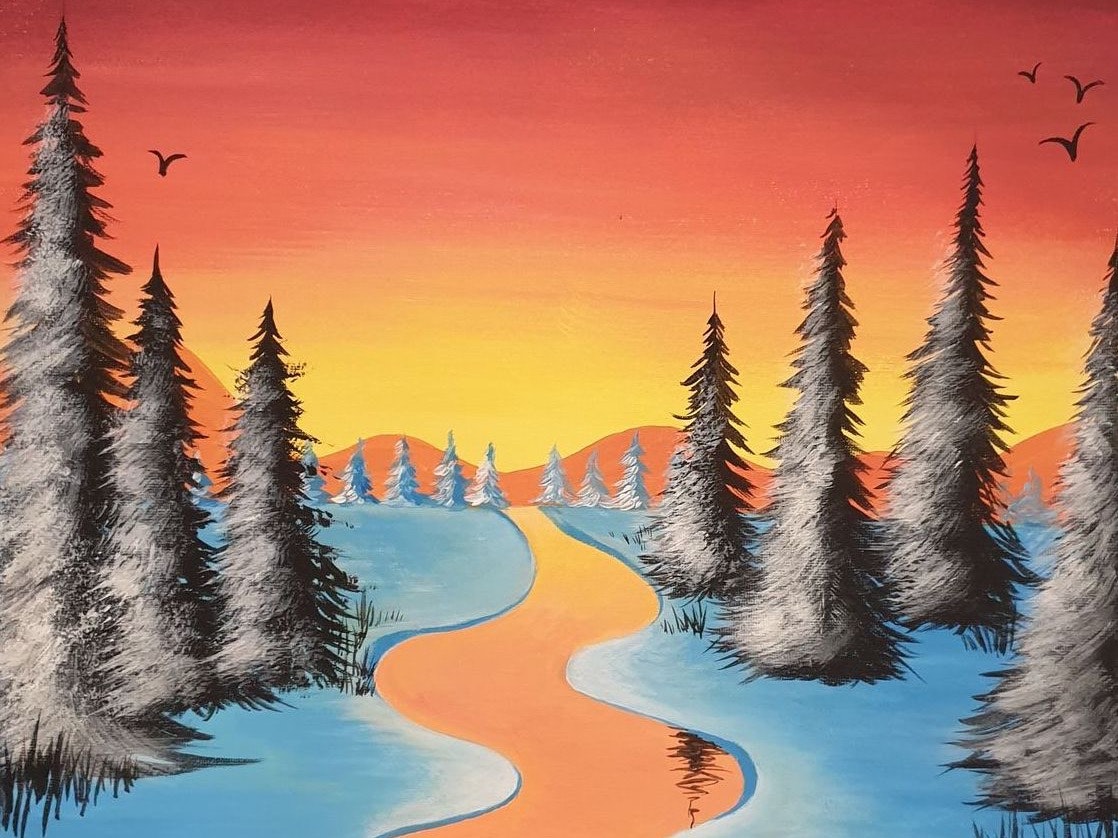 by Paint With Me Melbourne

How to Paint with Watercolour: All Your Questions Answered

Your Complete Guide to Christmas Floristry

Christmas Day Food Ideas: What to Bring to the Table

The 5 Most Common Mistakes Made by New Oil Painters