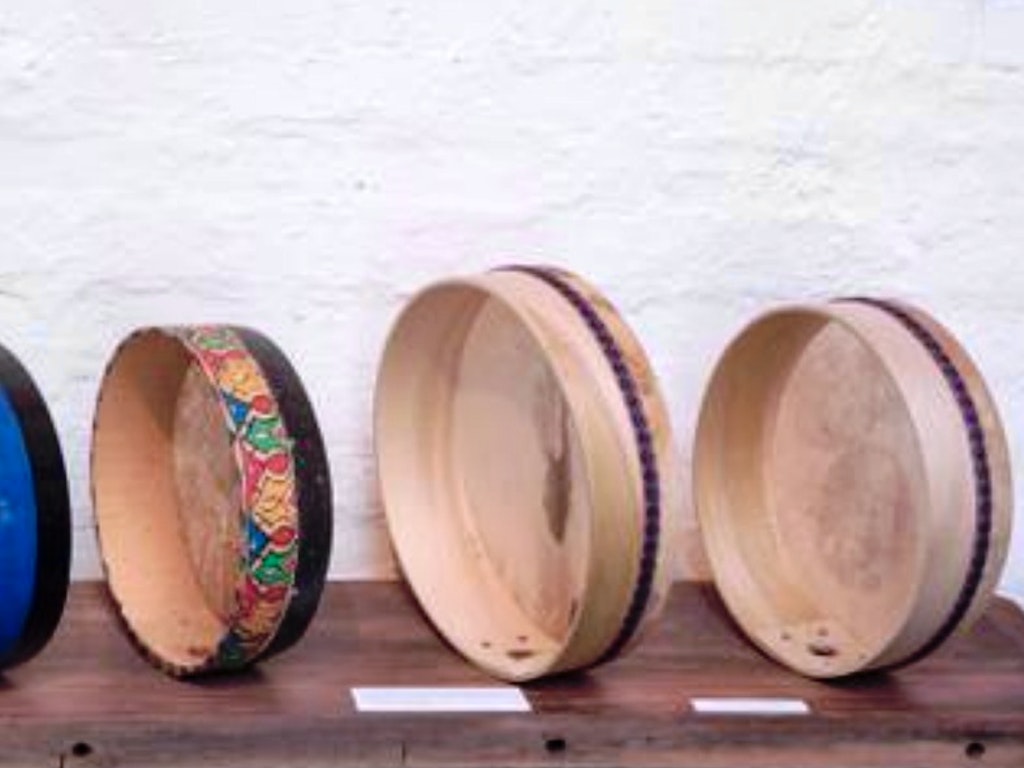 by Melbourne Guild of Fine Woodworking

Frame drums have been played for millennia, with depictions of women playing them in 5800BC Mesopotamia and even earlier in Catal Hoyok, Anotolia.

There are many different types of frame drums all over the world and played in various ways. If you look at music of the Arabic world, the Magreb, Turkey, Central Asia, the Mediterranean, Sufism and Shamanism, you will find the frame drum. It is a powerful and highly meditative musical instrument.

In this course we will be crafting a traditional Moroccan Bendir Drum. The Bendir has a deeper shell than most frame drums and a snare placed under the skin which gives the quintessential ‘buzzing’ quality found in Moroccan drumming.

Over the weekend you will gain knowledge of timber choices & the timber milling process. You will also prepare and then steam bend your shell. You will learn how to use hand tools for joining and preparing proficiently. We will also cover shellacking your shells, fitting snares, preparation & fitting of goat skins to the shell, trimming/banding and finally…some handy hints on playing rhythms!

Matt Stonehouse is a Melbourne based musician, composer and instrument maker currently living on the Dunmoochin Artist Colony in Cottles Bridge, Victoria. He lives there as an artist-in-resident. Matt Stonehouse is Australia’s foremost percussionist of Arabic and Turkish styles of drumming and is featured on more than forty albums of both local and international artists. In addition to percussion, Matt is a highly regarded guitarist, mandolin and mandocello player and uses these instruments when composing. This can be heard on his 2016 vinyl album release, ‘Rosie’s point of view.ʼ

His recording credits as percussionist are both impressive and extensive. Internationally notable artists he has performed/ recorded with are: The Ross Daly quartet (Crete), The Tea Party (Canada), Coleman Barks (USA). In Australia his credits include the ARIAnominated album ‘Empires‘ by Latidtude 37, Bashka, Mista Savona, Alwan, Yair Dalal ,My friend the chocolate cake, Zulya and the children of the underground, Kozmik County and surf rock group, The Reefers.

Matt first discovered MGFW in 2014 whilst attending the Shaker Bentwood Box course and became a student of Alastairʼs ever since. Other than the occasional fine furniture build, Matt focuses on crafting high end frame drums for musicians around the world and is currently designing a large set of 25 tunable drums to be performed by his frame drum ensemble here in Melbourne. When heʼs not playing or making drums…heʼs making Shaker Bentwood Boxes!

The Melbourne Guild of Fine Woodworking was founded by Alastair Boell in 2007. After graduating from the world renowned North Bennet Street School, Boston (USA) Alastair felt that there was a great need in Australia for an educational facility that focuses on traditional skills.

The Guild is committed to preserving and advancing craft traditions in furniture making. We are also committed to promoting a greater awareness and appreciation ofcraftsmanship. In our classes we emphasize the skillful use of hand tools and power equipment and an informed use of appropriate materials. We are passionate about what we do and want to share information, ideas and skills with all our students young and old, from beginner to advanced.

The Guild offers 13 Open Courses a week where students are able to bring in their own projects. Also during the year on a regular basis we offer a number of short intensive classes on varying woodworking topics. Our student to teacher ratios are very low with a maximum of 8 students in the open classes.

The school itself is conveniently located two minutes from the Blackburn Rd exit off the Eastern Freeway. Parking is readily available right at the school’s door.We promise to do our very best to provide you with endless opportunities in a stimulating and supportive community.

We invite you to take your place at the Melbourne Guild of Fine Woodworking.

Melbourne Guild of Fine Woodworking requires 1 month's notice via email prior to the start of a class or event for a full refund or transfer.

Refunds and transfers will not be processed if cancellation occurs within 1 month of the event commencing, unless we are able to replace the booking. We do not offer refunds for missed classes. There are no fees for refunds or transfers. For cancellations prior to the 1 month cut off, email Melbourne Guild of Fine Woodworking to organise a refund or transfer

I agree to take on full responsibility for any damages, injuries and for physical and/or personal property, which I might incur whilst participating in classes and/or events organised by Melbourne Guild of Fine Woodworking.

Melbourne Guild of Fine Woodworking requires 48 hours notice in writing prior to the class for a full refund or transfer.