If you haven’t been to the National Gallery lately, you still have until mid-June to catch one of the world’s most anticipated exhibits: Botticelli to van Gogh: Masterpieces from the National Gallery, London.. Originally slated for November 2020, the international art blockbuster has been in Canberra since March, led by Vincent Van Gogh’s remarkable Sunflowers.

Here, we list our five favourite Van Gogh masterpieces as well as the stories behind them.

One of Van Gogh’s works as a still-emerging artist, Avenue of Poplars in Autumn was created at a time when Vincent retreated to his parents’ home in Nuenen, Netherlands, at the age of 35. Van Gogh did not regard this painting as a work in itself but “a rather large study of an avenue of poplars,” as he described to his brother Theo.

Still, Avenue of Poplars in Autumn is an evocative oil painting that showcases the skills of an artist at a pivotal time in his life.

Many might tend to overlook this painting, but it’s a masterpiece nonetheless.

When Van Gogh lived in Arles, France, there was no shortage of inspiration to be found in the city’s architecture. Van Gogh had completed the bulk of his work during this time, completing 200 paintings and more than 100 drawings and watercolours. Trinquetaille Bridge, a moody and surreal portrayal of an overpass in Arles, is one of them.

Van Gogh completed his Self Portrait With Bandaged Ear - perhaps one of the most recognisable of his works - upon returning home from the hospital after he had severed his left ear. On the surface, we see the use of controlled brushstrokes, to effectively create tension and an unworldly atmosphere; but underneath it, we may have indubitable proof of the Master’s mental state during that period.

“I dream my painting and I paint my dream.” - Vincent van Gogh Celebrating Vincent van Gogh, who was born this day in 1853. Van Gogh was born in Holland and travelled to London and Paris before settling in Arles, Provence. He befriended artists such as Edgar Degas, Paul Gauguin and Georges Seurat on his travels, whilst developing his unique painting style of expressive strokes of vibrant colour and thick impasto. His work was notoriously under-appreciated during his lifetime and he suffered from depression, which tragically drove him to cut off his ear and eventually take his own life. He is now recognised as one of the most important and influential artists of Post-Impressionism, if not of all time. #omertirochegallery #vincentvangogh #postimpressionism #selfportraitwithbandagedear #vangogh © The Courtauld Gallery, London

So what’s wrong with this picture? While Vincent had injured his left ear, having used a mirror as a reference, he painted it to show a bandage on the right side of his face.

Sunflowers is a collection of paintings that Van Gogh created while living in Arles. He completed a total of five large paintings of sunflowers in vases, all of them made using only three shades of yellow “and nothing else”.

Van Gogh created these paintings to express his gratitude to his friend Paul Gauguin, who came to live with him for a time in the famous “Yellow House”. Gauguin hung the first two sunflower paintings in his room, and was so impressed by them that he later asked for a copy as a gift. Van Gogh reluctantly obliged.

A colossal work of art that sometimes precedes the artist himself, The Starry Night is perhaps Van Gogh’s most popular painting. It can be seen virtually everywhere today, including on coffee mugs, towels, and ref magnets.

Van Gogh created it while he was self-admitted into the Saint-Paul-de-Mausole lunatic asylum in May 1889, having suffered a breakdown that led him to sever his left ear. During this time, Van Gogh started incorporating darker colours in his paintings again - a mark found in his earlier works.

The painting itself showcases Vincent’s fascination with nighttime (as can also be seen in other works such as Starry Night Over the Rhone and Cafe Terrace at Night). It shows the many luminous lights of the night sky beaming down the city, inspired by the view of the dawn from his bedroom window in the asylum.

Try your hand and recreate a Van Gogh today and turn your living room into an art studio! 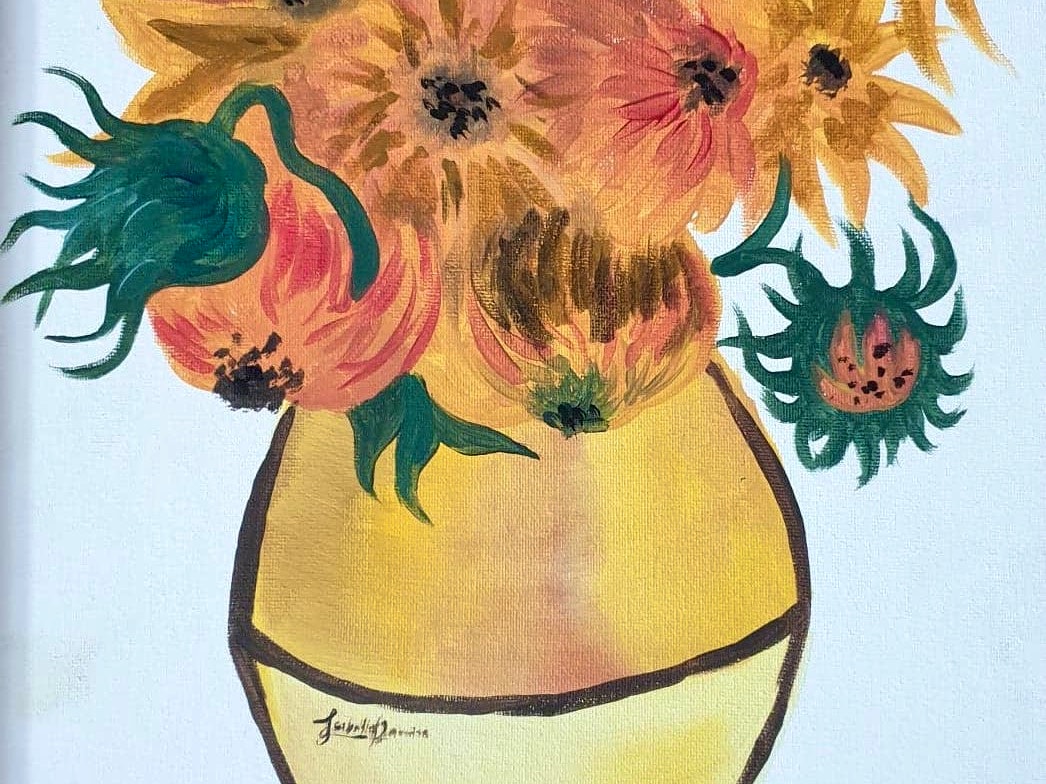 by Paint With Me Melbourne